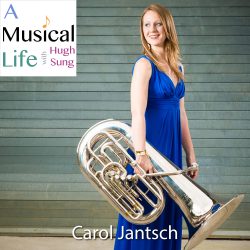 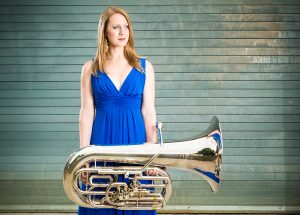 Carol Jantsch became the first female tuba player to win a major symphony orchestra position while she was still a senior attending the University of Michigan back in 2006. In addition to her duties as principal tuba of the Philadelphia Orchestra, Carol has been active as a tuba soloist, appearing in recital and in concerto settings with orchestras and ensembles around the world, and now has started her own tuba cover band called “Tubular”.

Carol Jantsch is a stunning virtuoso musician, which is perhaps even more remarkable for the fact that she performs on an instrument that isn’t typically known for its virtuoso capabilities. As you’ll hear in this interview, Carol thrives on hearing folks exclaim, “I never knew the tuba could sound like that!” I recently had the opportunity to sit down with Carol after a reading rehearsal together, and learned that she is not only a musical virtuoso, but between her varied interests in ultimate frisbee, distance running, reading voraciously and writing her own solo and ensemble arrangements for her tuba cover band, “Tubular”, she is also a virtuoso in the art of living.

I love Carol Jantsch. I’ve watched her career ever since she entered the Philly orchestra. I have a good friend trumpet player for Curtis (Stanford Thompson) who told me about her incredible achievement of passing the Philly audition at the age of 20. She has such a great attitude about music and live in general. I hope she always does. BTY, Hugh, I’m sure you know Stanford. He may be a good story for one of your podcasts.

Another great show! I first noticed Carol at Philadelphia Orchestra Concerts because of her small size. She was playing a contra-bass tuba and had to reach up and put a cone in the horn which was quite a stretch for her short arms. I also heard her play from a few feet away at a Philadelphia Orchestra preview performance, something they have sadly discontinued. Again, she was standing and I was amazed at her breath control especially from such a small body. Unlike most tuba solos I have experienced, she was perfect. I would like to experience her cover band… Read more »

Aurélia Azoulay-Guetta is one of the co-founders of a fascinating sheet music reader app called Newzik for iOS.  First, a little bit of history – it really starts with me, because I was one of the first professional musicians to go completely paperless. Back in 2001, I came up with a system for using computers... END_OF_DOCUMENT_TOKEN_TO_BE_REPLACED