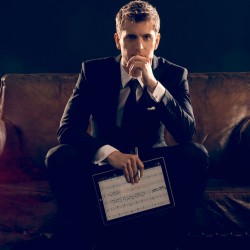 David William Hearn is an English composer and music producer based in London. He’s also the developer of StaffPad, a fascinating app for Windows tablet computers that lets composers create handwritten scores that get transformed into digital music.

As a composer, David has worked on scores for TV shows such as American Idol and The Voice. He has also orchestrated film scores for Les Miserables, The Chronicles of Narnia, and Ron Howard’s upcoming film, In The Heart Of The Sea.  As an app developer, Microsoft was so impressed with StaffPad that they invited David to share the stage with Satya Nadella for the 2015 Microsoft Build conference keynote address.

Aurélia Azoulay-Guetta is one of the co-founders of a fascinating sheet music reader app called Newzik for iOS.  First, a little bit of history – it really starts with me, because I was one of the first professional musicians to go completely paperless. Back in 2001, I came up with a system for using computers... END_OF_DOCUMENT_TOKEN_TO_BE_REPLACED