Warning: count(): Parameter must be an array or an object that implements Countable in /home/customer/www/amusicallife.com/public_html/wp-content/themes/playcastpro/lib/metaboxes/init.php on line 746
 Jeff Russo, Composer, Songwriter, and Founding Member of "Tonic" - A Musical Life 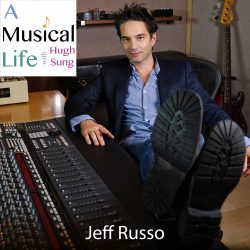 Jeff Russo was one of the two founding members of the rock band “Tonic”, perhaps best known for their number one hit in the 90s, “If You Could Only See”. Nowadays, Jeff is in demand as a TV and film composer, having scored music for hit shows like “Fargo”, “American Gothic”, and can currently be heard on the new FX Marvel series, “Legion”.
Welcome to A Musical Life. I’m Hugh Sung. Jeff Russo is a two-time GRAMMY® and Emmy-nominated musician who taught himself to play the guitar as a child before going on to become one of the founding members of the multi-platinum selling rock band, “Tonic”. Their debut album, “Lemon Parade”, posted three singles in the U.S. Mainstream rock Charts’ Top 10 back in 1996, with the song, “If You Could Only See,” rocketing to number one. Jeff is now a highly sought-after film and TV composer, having scored the music to the new show “Legion” based on Marvel’s mutant comic book characters and currently airing on FX. He’s currently working on the score to season 3 of the hit series, “Fargo”.

I’m so impressed at how Jeff Russo shares his background and what he’s doing now. Hugh Sung, you are an excellent interviewer and Jeff Russo, you’re a terrific guest.

Aurélia Azoulay-Guetta is one of the co-founders of a fascinating sheet music reader app called Newzik for iOS.  First, a little bit of history – it really starts with me, because I was one of the first professional musicians to go completely paperless. Back in 2001, I came up with a system for using computers... END_OF_DOCUMENT_TOKEN_TO_BE_REPLACED